Volunteers of The Year 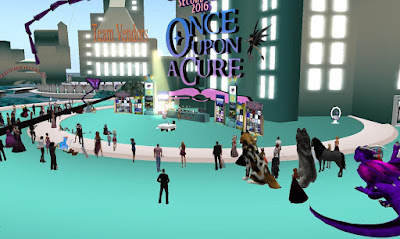 Second Life had it's share of movers and shakers in 2016. A number of people made headline news in the past year, many for the better, a few for the worst, and some quietly working behind the scenes. For a century, the American Cancer Society has worked to combat the disease of cancer. It's most successful and signature fundraiser is the Relay for Life. A community-based charity, soon after Second Life came to be the Relay came here, and grew. Today, the Relay for Life of Second Life ranks as the Relay's 19th largest team worldwide.

From March to August every year, with spinnoff events in the Fall and winter, the Relayers hold events to raise money to fund research to help find treatments and cures for cancer. While the disease is serious, the Relayers make the events a social occasion and have fun doing it. In a little over a decade, it has raised over a million dollars.

As mentioned before, this is one of the largest Relay groups worldwide. With people across many regions and communities, across Second Life of all kinds of avatars, and across nationalities and languages. The high point of the Relay season, the Relay Weekend, which has hundreds of avatars walking around a forty-plus sim track with exhibits around it, is one of the biggest, if not the biggest, yearly event in Second Life. Among the people whom are a part of it are the neighbors of the Second Life Newser, the Sunweavers, who take part through it's own  team, the Sunbeamers.

Not everything about the Relay has been happy. As the group's numbers include people with cancer and family history's of, inevitably some people every year pass away from the disease. This year, they included Catt Gable, Zaphara Cazalet, and Shady Fox. Nikoli Redmayne, whom was aboard an airline with a bomb, met his end at the hands of a different enemy. With occasional charlatans making news with fake charities, some people have come to mistrust every single one, even one with a good record such as the Relay. And in an era of fake news, there are the occasional charges of global conspiracies. But despite the setbacks, the Relay continues on, helping to fund treatments and cures, and bringing closer the day all cancers have safe and economical cures.

For it's continued successes in aiding real-life medicine, and for involving many hundreds of Second Life residents. the Second Life Newser has named the Relay for Life in Second Life as Second Life's Persons of the Year in 2016. In a year that in real life has been the end of the lives of so many public personalities, it is appropriate the title goes to a group of people helping to save lives.

Honorable mentions recommended to the Newser by it's readers are Sue Peregrine for her continued work in keeping the d'Alliez community together, Ty Tenk and Truck Meredith for their continued work in maintaining the Calas Galadhon Park sims, JP Laszlo the former leader of the Trump Organization in Second Life for the attention (and controversy) he brought Second Life to those outside it, and Dane Zander for Linden Labs bringing back his Lost Gardens of Apollo after years in the virtual nether. Others whom deserve an honorable mention include the late Ladyslipper Constantine, whose volunteering for many events in Second Life sadly came to an end with her passing this year, the Insilico roleplay community for surviving setbacks that almost meant their demise and ending the year safe and sound (and the person or persons who are providing the money), and the Linden Moles for their continued work in Second Life, such as the Horizons homes and sims and bringing back Mont Saint Michel and the Lost Gardens of Apollo to the grid after having vanished.
Posted by Bixyl Shuftan at 6:05 AM