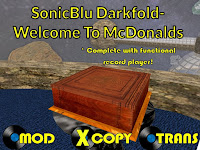 SonicBlu Darkfold, noted for his "Time Machine" radio performances inworld and his work on the "Pawpets" show outside Second Life, has been selling a few goods in Second Life Marketplace. Many of the items are just a few Lindens, such as the t-shirts. Others cost a little more, such as his record players which have various recordings such as his "Welcome to McDonalds," a parody of "Welcome to the Jungle." Some items such as an "applause" box and "exit" sign are meant for clubs and hangouts.

https://marketplace.secondlife.com/stores/38417
Posted by Bixyl Shuftan at 6:02 AM