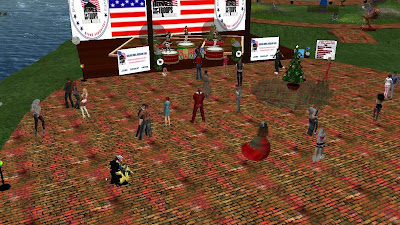 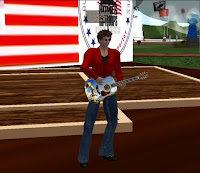 On Sunday December 18 at 4PM SL time, Veterans Isle held it's monthly benefit for the Homes For Our Troops Charity. Waya Snowpaw started things off with a DJ session. Franklee Anatra played from 5 to 6 PM. DirtyDee Sweetwater had the stage from 6-7 PM. Frets Nirvana, who helped organize the event, performed for the crowd from 7-8. The last hour was covered by Hogan Baily and his three dancing girls.

People in the crowd either stood or danced as they enjoyed the music, donating cash to two home-shaped kiosks on either side of the stage. Frets would occasionally add a little of his own after certain levels had been reached. 70,000 Lindens had been raised by the end of his hour, and he rose it to 75K. "Your wife is going to take your credit card, Frets," someone mused. 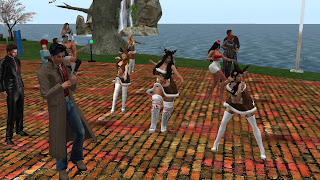 Talking to Frets after the event, he was happy but tired, "Yeah ... (laughter) ...I am worn out again ! But ....yeah ...looks like with our effort for HFOT. So far over $11500 for HFOT this year ...and the totals are not in for December." Frets still had one more charity event later, probably at Club Vet. 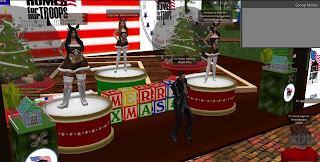 The benefits take place every month at Veterans Isle, with GJackie Winkler helping to host the events. Usually they take place on the last Sunday of the month, but as Christmas falls on a Sunday this month, it was moved up a week. The next event should be on January 29, 2017. More information on Homes For Our Troops can be read at https://www.hfotusa.org.

And with a successful year behind them, Veterans Isle and Frets Nirvana can have a Merry Christmas and a happy New Year.