Second Life Used For Hotels.Com's "Hotel Room Of The Future"


What will the hotel room of the future be like? It was a question recently asked by hotels.com, a hotels booking service on the Internet that many are familiar with due to their commercials. The result was a video done in Second Life for them by Pooky Amsterdam's Pookymedia. Pooky contacted the Newser about the details. 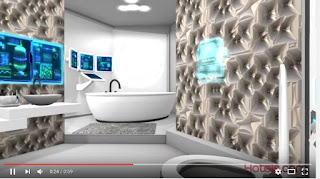 "It was Dr. James Canton who contacted us. He was the exec. producer of "Time Travelers," and Hotels.com asked him to do a prediction on hotels of the future and off world hotels. David Denton did the building for the Hotel on Mars. It's really stunning."

The video shows a futuristic-looking hotel room with amenities that have only recently been developed, still on the drawing board, or the technology hasn't been developed yet. These include a robot butler, a 3-D printer, a "smart toilet," and a bed with a "neuro-dreaming" feature.

Pooky went on to say while Pookymedia has done videos for clients before, hotels.com ranks as one of their biggest. More about the video can be read on the Pookymedia blog.

James Canton was interviewed by Canadian news station CTV News about the video, where he explained some of his predictions. You can view the interview here.