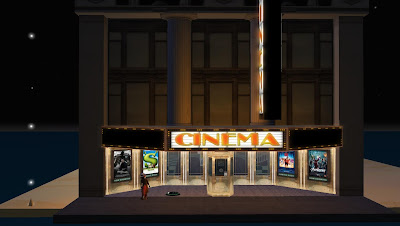 For quite some time, the "Feral Furry" theater has been a feature at the Sunweaver Estates. But it's been a relatively simple design: a sky platform with a screen and a few seats. But Felina Firmi recently decided to give the place a makeover, so it looks more like a real theater, with posters decorating the exterior. You don't need to buy a ticket at the booth, though. 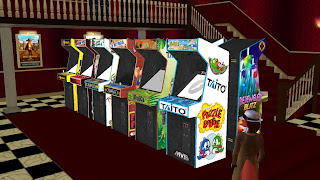 The place is more than just movies. In the lobby, there's a small arcade of video games. One has to have the right edition of flash installed to play them. Most are from the 1980s, such as Outrun and Q-Bert, though there's a "Bejeweled Blitz" machine with the noted handheld ap game and a "Fix-It-Felix" game that came about only after the "Wreck-It-Ralph" movie about video games did well in the theaters. So it's a bit poetic that Felina put that last game here. This marks the first gaming arcade at the Sunweaver community since the closing of Club Fur. 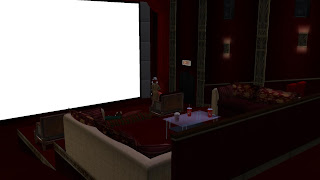 There's a small projection room with the camera, though most will want to see the movie from the seats. Rather than the packed rows of traditional theaters, the arrangement is more relaxed, with seating around tables mixed in with single-person seats.

Felina is proud of her work, and is looking forward to movie night on Sunday when a number of her neighbors will gather to see the weekly pair of films. One of the two films will be the annual showing of "The Star Wars Holiday Special."