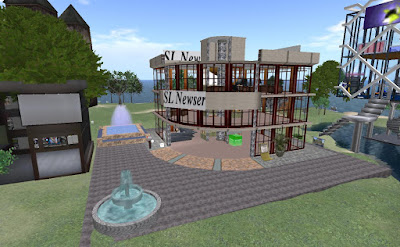 It was just a few days and four years ago when the Second Life Newser had gotten the office it uses today. For the previous year and a half, the Newser had used the blue and gray brick building provided by Ranchan Weidman, along with the land on it. But after a few people expressed a desire for change, Ranchan built and placed the glass office with the rounded front. We liked it right away. 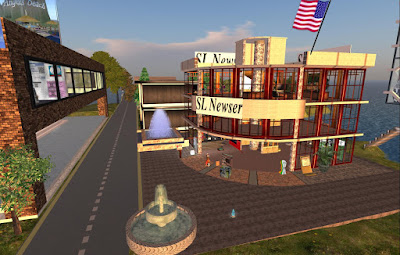 Four years later, the building still stands. Some things around it have changed, such as the road and the rental office/lingerie shop across it. And there's been a few small decorations added, and "Chilly" the Firekitty office cat. But it's still our center of operations.

If you want to see the place for yourself, drop by at HV Community (140, 85, 25). And if you're around on Wednesday, Friday, or Saturday, drop by Club Cutlass to the southwest.