Remember the "Creepy Crawl" Linden Lab organized on Halloween? It seems the event's been such a success, they're doing a Christmas-themed venue-hopping event, the "Jolly Holiday Crawl,"combined with the "Snowball Showdown." 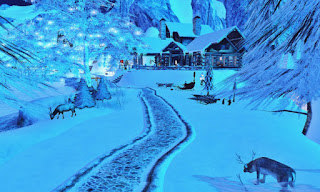 It’s beginning to look a lot like the holidays have taken over a good portion of the grid. Everywhere you look, there’s snow, lights, and so many wintery delights that all you can do is sip a peppermint latte and smile. And then join us for some thrillingly chilly fun festivities inworld on Monday the 19th, starting at 10 am SLT and ending in a snow-flinging frenzy where Lindens and Residents can frolic in an ice castle, pelting the hail out of each other at the Snowball Showdown!

The Crawl goes from 10AM to Noon SL time, taking place at four locations with half-hour intervals. The places are "The Arctic Express," "Kate's Whirl," "The Winter Ice Christmas Festival," and "Frisland."

Following the Holiday Crawl comes the "Snowball Showdown," which in previous years was called the "Linden Snowball Fight," taking place at Linden Labs' Winter Wonderland area. The location of the place has yet to be published by the Lab, though in previous years it was accessible from Portal Park so it can be assumed the snowball fight arena can be reached from there: Portal Park 1 (175/118/52)