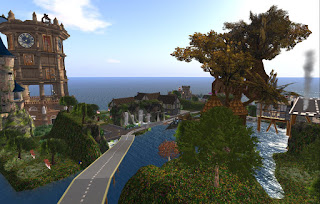 On Tuesday November 29, Linden Lab announced it was starting the increases of the prim capacities of private sims. On Friday December 2, Sunweaver chieftess Rita Mariner announced to the community that it's residents now had it.

Sunnies/Islanders:  I went around and upgraded every ones rent boxes to reflect the new level of prims you get based on the extra prims each sim got.  Each 512m lot gets 156 prims now, That is a nice boost and it's free! Those of you with large parcels got HUGE bumps in prims, ENJOY!  The ER will be open for Prim OD's 24 hours for the next several days.

That evening, Rita told me she had finished in the morning, thinking originally each lot would get 152 more prims, but instead they got 156, "It was hefty upgrade per lot."

There have been a few people asking why the private sims get less of an increase than the mainland ones did earlier this month, as well as it coming later. The general feeling of those I've talked to feel Linden Lab is trying to encourage people to move to the mainland. But most are simply happy with being able to do more with their land.