Adventures in Tyria, A Look at Guild Wars 2 And Legendary Weapons 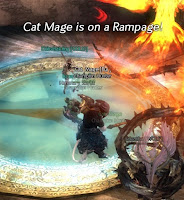 Besides Second Life, Grease Coakes has also been spending some time in Guild Wars 2. This MMO game has gotten some attention over time, such as the creativity involved with it's races including one of plant people. Grease has gotten quite good at the game, proud of his "Cat Mage" character. Lately he's made an accomplishment that he's made him a little more proud, acquiring Rodgort the Legendary Torch. So what's Rodgort and how does one go about getting a legendary wepaon? Grease had a few things to say.

Read Grease's story in Other Grids, MMOs, and Games.
Posted by Bixyl Shuftan at 6:02 AM