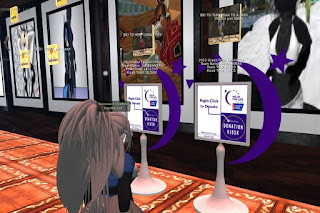 Last month, Team Sunbeamers, the Relay for Life team for the Sunweaver community, started it's first two events: "Bid Me Human" and "Bid Me Goat," with yours truly Bixyl Shuftan and fellow vulpine Liska Fuchs as the volunteers. On Friday March 15 at 8PM, team captain Rita Mariner calculated the totals at Club Cutlass. 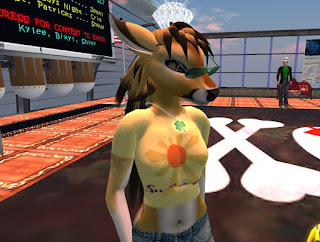 So it looks like Liska will be dealing with a few "buck stops here" jokes and yours truly will be furless, at least for a few weeks. Being a journalist however, I can switch back to my usual self when doing an interview, or something else related to the paper. But other times, I'm without the pointed ears and tail.

And yes, it's not the same human avatar after the first couple "Bid Me Human" events. I figured two rounds of "Blazing Saddles" jokes was enough, so went with an Asian avie instead. 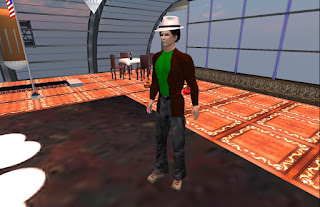 In the meantime, the fundraising by Team Sunbeamers continues. There will soon be another round of "Bid Me" volunteers.  The team itself has climbed to almost 64,000 Lindens, passing the halfway mark to Gold. After that is Platinum, in which I appear as something special for a week. The first couple times, it was a look I hadn't gone about before. What will it be this time? You'll see.