RFL Team Sunbearmer's "Bid Me Human" and "Bid Me Deer" 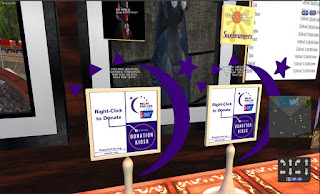 With the Relay for Life's season underway, Team Sunbeamers has launched the first of this season's "Bid Me" events. First, the team is running a "Bid Me Human." The volunteer putting his looks on the line: yours truly.

Beamers:  We have our first victim, I mean volunteer, Bixyl.  Hoe offered to go Human for a week, per 5000L+ raised.  The Bid Me will Run thru the middle of MARCH.  So Bid Early and Often.  Kiosks can be found at Club Cutlass..

Based on the "Bid Me Bald" events popularized by Trader Whiplash, in this fundraiser someone known for being in a nonhuman avatar offers to go about in one for a set period of time. For this event, there are two kiosks in the back of Club Cutlass, the one on the left to bid yours truly sans fur, and the other to keep him as is. If 5000 Linden dollars is donated, yours truly will be not so foxy for a week. For every additional 5000L, rounded up, the time period is extended another week. For example, 9999 Linden dollars would mean one week while 10,000L would mean two. If the amount in the "stay foxy" kiosk is higher, then I walk away with my fur intact. 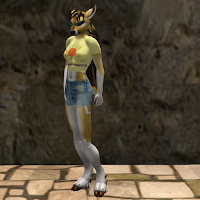 As before, there is one "out." As I'm a journalist in Second Life, I get to go back to my usual looks briefly when going about my duties, such as interviews.

Liska Fuchs' "Bid Me Goat" last year was such a hit, she's doing another one. This time, she's offering to be in a doe avatar for a while with "Bid Me Deer." As with "Bid Me Human," there's two kiosks, one to keep her as is, the other to change her to a deer avatar for a period of time. The rate is 2500 Linden dollars for the first week and 2500L for each additional week of vegan menus and "nice rack" jokes.

As of the writing of this announcement, Team Sunbeamers has gone over the 15,000 Linden mark and into Bronze level. The Linden dollar amounts to reach each rank are a little higher than those of last year in the Jade rank and higher. Plus there are two new ranks, Topaz and Diamond. As before, the highest rank is Purple which takes 3,750,000L, almost four million Linden dollars. 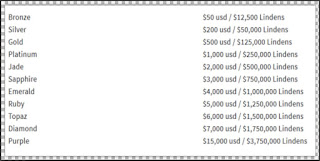 Last year, the team pulled out all the stops and made it to Emerald rank for the first time. How high will the 'beamers reach this year? We'll see. For now, I'm already getting questions as to what I'll do should the team reach Platinum rank.

People have until 8PM on Friday March 15 to donate to the kiosks. At the end of the party that night, the totals are finalized and the time period for the Bid Me (assuming the "Stay Foxy" kiosks doesn't win out) begins.