Destruction in Montecito Bay: Number of Buildings Wrecked, Cause Not Yet Known 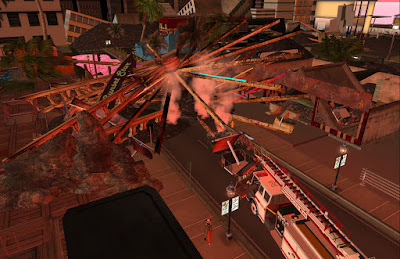 Groundhog Day, unlike the movie of the name, was anything but the same old thing to the residents of Montecito Bay. What started out as a celebration for the grand reopening of their Magnum Opus Lounge ended up as carnage with part of the sim reduced to rubble and wreckage. The cause is still a mystery as everyone in town was inside the newly restored venue partying. 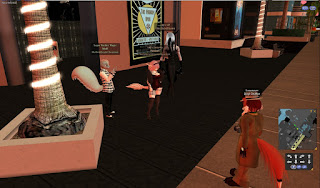 "Uhh .... hi," Moff (MoffettMephit Resident) nervously grinned when I approached him just after the incident, "We uhh, had a thing." After some moments to compose himself, he stated, "I dunno what's going on. ...  We were at the opening. It was a good party. Fun, great music. And all of a sudden it was....we all thought the DJ was playing with us. 'Cuz we heard these, ya know how in the movies, they do laser fire? It sounded like that. Ya know, that 'pew, pew, pew.' And, of course, explosions and weird sounds. But we thought it was the DJ. But I noticed it was loud, but not coming from the speakers. So I snuck a peek outside and saw, well, this. So I told everyone to get out....and then well, here we are. Most of the folks went to go check on their homes." 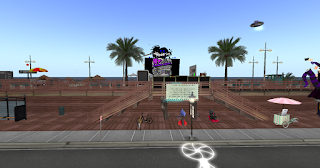 The clues as to what happened are few. Moff did have a picture from Flying Pickle owner Sheba Metaluna (shown left) and showed it to me. "There were like 30 people out here. All taking pictures," he explained, "I imagine there's better than that one. And we didn't really see much, until we got out here. But by that time, I guess it was over." As of the writing of this article, no one else has posted a picture or shared it with the Newser. 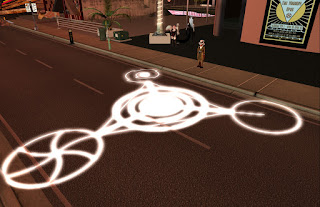 One other clue was that the mystery "crop circle" patterns that appeared on the city streets a couple months ago have changed from their previous black color to glowing. " I mean, I can't explain it," Moff struggled for words, "The Galleria.... this glowing paint or whatever.... I mean it's not even glowing. It's giving off light....and now all this."

What could have caused all this? "This must have been a gas leak or something," Moff stated at one point, "Oh, I have to believe there's gonna be an investigation." The buildings might not be repaired that quickly, "I dunno what they'll let us do until that's done. Well, we'll get our police investigators on it. There's gotta be a reasonable explanation for all this. There were a lot of witnesses thought, at least after the fact." 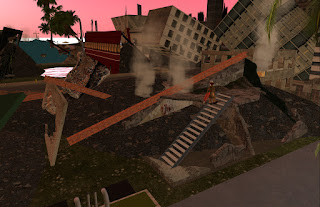 Moff told the Newser he would inform us of any findings. Despite what looked like a flying saucer on Sheba's picture, Moff felt there had to be another explanation, even though a strange craft crashed in another of their buildings in mid-December, "I'll let you know what we find. ... I uhh....yeah, whatever we find out, but really, I mean....flying saucers?" He looked at the scenes of destruction, "I guess I better call the Crux Construction Company, again." Gin Ghostraven made some random comment, "At least no one found a gun laying around!"

Looking around, a number of buildings, all in the southwest corner of the sim, were damaged or destroyed, with piles of rubble and pools of water all over the place. While searching around, one of the walls had red stains that looked suspiciously like blood. There were no bodies or body parts nearby, though, at least not uncovered by rubble.

Addition: The following was posted on Montecito Bay's Discord by Becky Nosferatu: 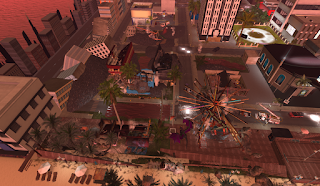 "Ardor here, bringing you the Dragon-Eye scope today... As I've recently been hired by the council to do snaps of the city from high up- When I left my cave last night and flew to the island, I was stunned to find this disaster!  I've been told by City Officials that there was no casualties, unless you count Wasa Bay Sushi and the Sunset Diner a casualy. I do... what is it that all the younglings say today? 'Press F for respect?' I don't know what that manes, but... do it. On the upside of no living casualities, I must stress that you try to find an alternate rute to Avagora. I've used my Magic to edit the teleporters at the main landing. Use that instead. I'll keep you all posted, but... try not to panic."

Note: The preceding is a fun article based on goings-on by the people of Montecito Bay themselves and not the actions of any griefer.
Posted by Bixyl Shuftan at 6:02 AM