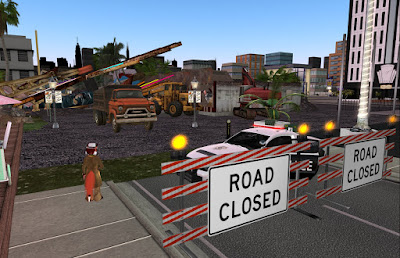 It was a week and a half ago on February 2 that Montecito Bay experienced a number of buildings in the southwest corner of it's sim getting demolished. As everyone was partying in their newly opened Magnum Opus Lounge at the time, no one saw who or what caused the damage, though there was a picture taken of what looked like a flying saucer in the distance. After some going through the rubble by investigators, the cleanup and rebuilding has begun. The crop-circle patterns on the streets are still glowing. Curiously, a new one has appeared at the sim's entry point, also glowing. As with the original patterns, no one knows how it came to be. 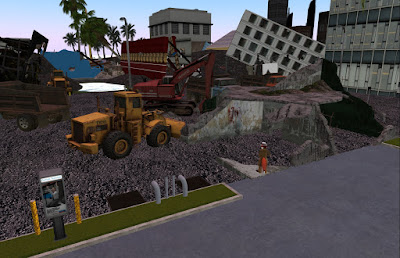 Some strange red stains that look suspiciously like blood splatters remain up. Presumably, investigations are continuing on what it really is and how long it's been up. No investigation findings of either the massive wreckage or the mystery spots have been made public.Neither has a date been given on when the cleanup and repairs are expected to be finished. One date that has been given is for the notices for the club events to be printed in color again instead of the basic black and white pictures they've been for the past two weeks, on February 18. Montecito Bay official Emorald told the Newser that the print shop normally used to make the notices was among those wrecked on Groundhog Day. It wasn't stated though whether or not they'd continue to have the strange hieroglyphic-like symbols on them that had been appearing for weeks.

Addition: Talking to Moff later today, he remarked, "... the cleanup is continuing. We have the Crux Construction Company working 'round the clock to at least get the place cleaned up. It might not get rebuilt right away, because there's all kinds of issues involved with rezoning. But at least we won't look like a junkyard for too much longer."

Note: The preceding is a fun article based on goings-on by the people of Montecito Bay themselves and not the actions of any griefer.