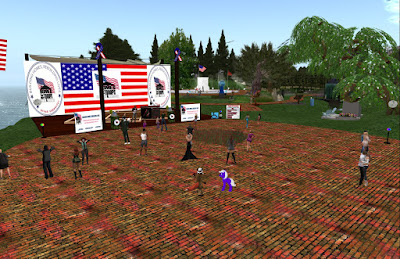 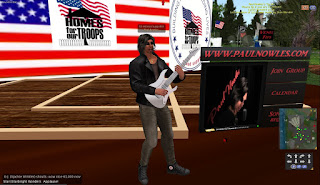 On Sunday January 27, Veterans Isle was the location of a fundraising concert for the Homes For Our Troops charity. The event took place from 4PM SL time to about 9PM. The fundraiser was organized in part by guitarist Frets Nirvana.

The first hour, DJ Waya Snowpaw played the music. At 5PM, Quartz took to the stage. Paul Nowles strummed his guitar at 6PM. At 7PM, Erik Ordinary performed for the crowd. Finally, Savannah Coronet played for the event's last hour. 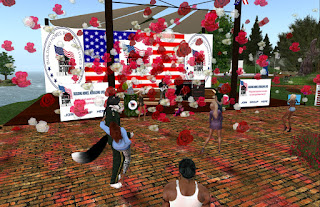 Frets cheered on the crowd, occasionally offering to match the next large donation. Between 6:50 and 6:56, 22,000 were donated in the two house-shaped kiosks on either side of the stage. Savannah Coronet also offered to do a free concert for the largest donator on her set.

At the close of the event, a total of 160,700 Linden dollars had been raised.

Homes For Our Troops is a charity that builds and donates houses to disabled veterans. Veterans Isle holds fundraiser concerts to raise money for them every month, usually on the last Sunday of the month.

To learn more about Homes for Our Troops visit their website at https://www.hfotusa.org .