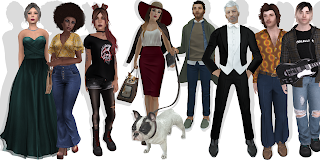 On Wednesday January 30, Linden Lab announced on their blog that they had released some new starter avatars. While made for newcomers, these are accessible to everyone. Half males and half females, the avatars have a variety of appearances, such as age, skin tone, clothes, and accessories.

Some Residents have noticed that we’ve added a new group of classic, system  “starter avatars” to the mix this week - a more mature couple in formal apparel, a groovy guy and gal, a pair of grunged-out music lovers, and some well accessorized, fashion-forward folks (because there is no better addition to any outfit than a pet!). While the last few batches of new starters have focused on Fantasy themes, this round we wanted to add some updated humanoid styles for new Residents to select from. Each avatar has been created utilizing some of the latest features in Second Life such as Bento - and have also been created with a focus on optimization to keep the avatar complexity below 30,000 (with most coming in around 10,000- 20,000). 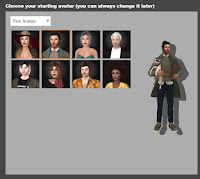 Most things about the avatars are no-modify, although the shapes are. Inara Pey reports that they also lack an AO, which gives them the "duck walk" some residents dislike.

There's also a forum thread for commenting about the avatars, which a number of people have done already.