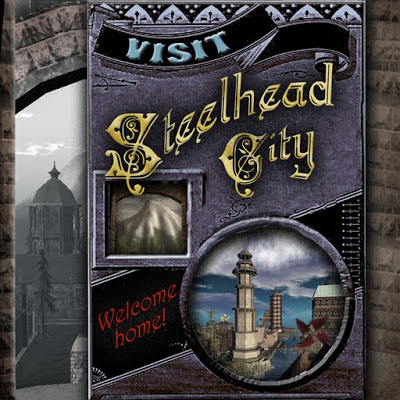 Great news. The Steelhead community is once more sponsoring the Second Life Newser. What made them stop? To begin with, Steelhead for several years was one of the more notable steampunk/Victorian communities. While not the largest, it certainly enjoyed high visibility due to it's award-winning Relay for Life team and the antics and events of it's residents, such as it's yearly eruption of Mount Saint Hellens. But in September 2015, the owner of the sims at the time announced he had to leave Second Life for a while due to real-life difficulties, and the estate closed a few months later. Although it's residents were able to move to other sims, they missed their old home. Finally in March 2017, Fuzzball Ortega, the sheriff of the old community, announced he would be rebuilding Steelhead. And in a short time, the sim of Steelhead Bay was full of buildings.

We look forward to covering the Steelhead community's Relay events, plus other antics of this interesting steampunk area.
Posted by Bixyl Shuftan at 6:04 AM