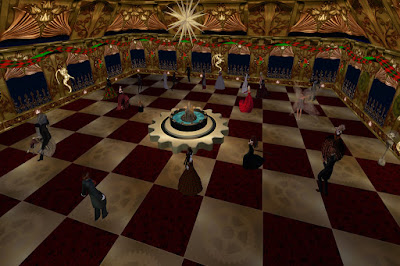 Pictures taken by Cynthia Farshore. The noted Victorian/Steampunk community of Caledon had it's thirteenth anniversary yesterday, Tuesday February 26. There were four events that day and evening. Two were at the Book and Tankard Pub in the Victoria City sim at 1 and 4PM. At 7PM was the Caledon 13th Anniversary Ball in the Dragon Ballroom hundreds of meters over the Caledon OnSea sim. 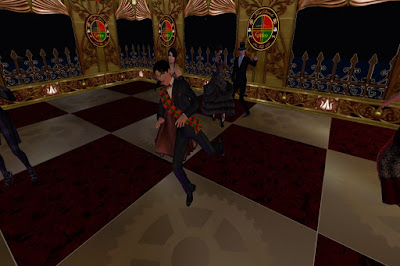 Among those there at the Ball was Caledonia Governor Desmond Shang. Nicknamed "The Guv" by other Caledonians, he was doing a rather unusual dance. At 10PM was the Late Night Caledon/CCB Birthday Bash.

Events will continue in Calendon this week, such as a party at the Goblin Cave on Thursday February 28 and a Mardi Gras parade on Saturday March 2. Stay tuned for details.
Posted by Bixyl Shuftan at 6:02 AM