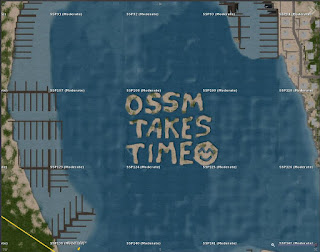 The SSP sims, the new mystery continent, remain off-limits to regular residents. But there had been a few visible changes on the map in the past month. On the SSP2 QA Test sim to the northwest, there's an image of a mouse appearing. In the middle of the landmass, a build with orange rectangles has appeared. Then there's the whimsical message on the SSP124 sim. The land was sculpted to say when looked at from the map "OSSM takes time," with a smiley face in the corner.

Presumably, "OSSM" means "awesome," and the moles are saying it's going to be a while before the region is ready to go public. 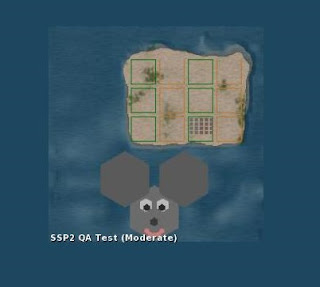 No date has been given as to when the sims in the region will be ready and opened to the public. It is believed the sims are intended to be residential areas, though Linden Lab isn't saying what the "Super Secret Project," to use the name described what "SSP" stands for at one Town Hall meeting, are for.

Hat tip: Daniel Voyager.
Posted by Bixyl Shuftan at 6:04 AM