Musician Chip Takacs Dies, Was Minutes From Performance on Stage


In Second Life, we often take many things into consideration. But seldom do we think about death. Sometimes when it arrives, we have a little warning such as when someone announces he or she has cancer and has to take a break from the Grid and later on we sadly hear the person has passed away. Other times, the news comes to us as shock and surprise as someone who was doing fine one day is suddenly dead. Last week however, there was a case in which a man died at his computer just minutes after talking to others and with his avatar still around. 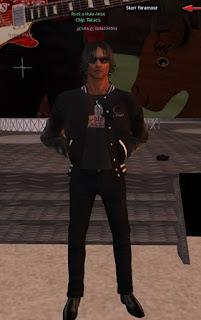 Over the weekend, I heard about the passing of a musician named Chip Takacs. Jen Smith had posted the news on Facebook early Wednesday February 13. She would later post something from Lisa Lavoie.


Just to maybe save someone from having to repeat what happened... Chip was in SL Tuesday morning, around 8am SLT to do a show. He was typing to people in local...and joking around with them, like he always did. A couple of minutes before 8am SLT, they put his stream in as he was getting onto the stage. But he never turned the stream on and never started playing.  After awhile, they thought maybe he'd fallen asleep. When it was time for the next performer to go on, they bumped Chip's avi off the stage so the next performer could play.

This afternoon, they found out that Chip had passed away. A RL friend of his, who is also a performer in SL, confirmed it after speaking with Chip's RL wife. Speculation is a massive heart attack, but they are going to do a private autopsy to verify that.

Around 9pm a small group gathered where Chip stands to try and console each other and deal with the shock of losing another SL musician and friend. It started with a handful of us...and as I logged out at midnight SLT, there were 60+ standing around swapping stories, passing the mic and spreading the word that we lost another one.

The uniqueness of this loss was that Chip was still with us in SL. He's still there, as we remember him....but he's not really there. He's really gone. It was both eerie and comforting to be able to stand there with him...in honor of what he meant to each of us individually. It was quite a moment in my SL history. When we all just stood there with a fallen friend, not wanting to leave him standing alone....knowing that at some point, he will be logged out for the final time. 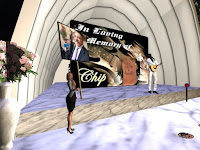 There were numerous messages of condolences after Jen Smith's post, "So sad to hear of his passing (sad) He was one of a kind. He will be missed. RIP Chip." "RIP Chip my friend.You will never be forgotten, always in my heart." "Chip was a Great Person." On Second Life, there was a memorial concert for Chip on the night of Friday February 15, scheduled to last until Saturday morning, "it is booked solid until 9:30am SLT on Saturday morning....and that's just from the performers who were standing there with Chip tonight."


Chip, or Michael Taska as he's known there, does have a recording of him singing on Youtube.

For many users, the sudden passing of someone is something they do not know how to react to. To many others, it's a reminder that death can come without warning, even while you're seemingly safe at your computer. In any event, it's a sad time for the friends and family of this musician in real life and Second Life.