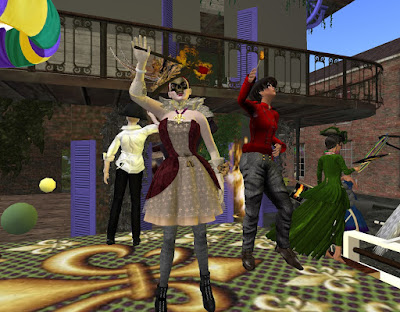 Mardi Gras is coming. For some, it's the last day before Lent and the last day they can eat certain foods, so they revel things up with a festival. The day is sometimes called Carnival or Fat Tuesday. For the rest of us, it's a chance to party, even if we don't give up anything for Lent.

In the United States, New Orleans is particularly noted for it's parades and celebrations on Mardi Gras. So it's no surprise that the best known Fat Tuesday events are in the New Orleans-themed sim of New Toulhouse. This Saturday, they'll start their "Samedi Gras" party at 11AM SL time, with their parade scheduled to start at 12 Noon. 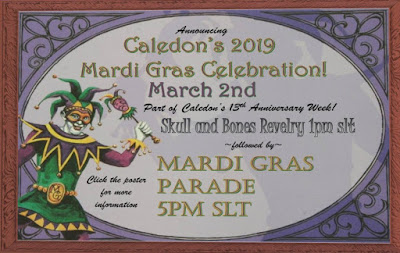 There will be other celebrations. As Caledon is celebrating it's thirteenth anniversary this week, they're making a Mardi Gras celebration as part of the events.  The fun there starts at 1PM with a "Skull and Bones Revelry." Then comes a parade going through fourteen sims. 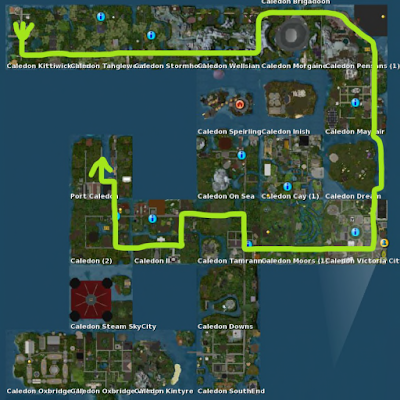 We'll start at 5pm slt on March 2nd, setting off from near the western coastline of Kittywickshire, east through northern Caledon until we reach the eastern side of Pensans, then south to the Guv'nah's Mansion in Victoria City, then west to Caledon Prime and north into Port Caledon.

The starting point of the parade is at http://maps.secondlife.com/secondlife/Caledon%20Kittiwickshire/60/130/25
Posted by Bixyl Shuftan at 6:02 AM