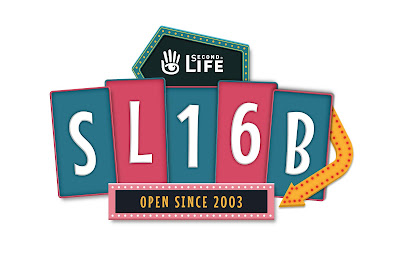 Yesterday on Thursday March 14, Linden Lab made it's first announcement about the upcoming Second Life Sixteenth Birthday event, or the SL16B as it's called for short. The theme of the anniversary celebration will be "Sweet Sixteen."


It feels like we just packed away all that crystal magic from our 15th anniversary celebration, but our sweet sixteen is just around the corner! This summer, we’re throwing a huge celebration to commemorate 16 years with this incredible community and we wanted to fill you in on just a few of the details.


Sixteen years ago, on June 23rd, 2003, Second Life launched to the public. Though it feels like just yesterday and a lifetime ago at the same time, this year we couldn’t pass up the opportunity to go retro and embrace the “Sweet Sixteen” theme for our big party. Sock hops, bowling alleys, and late nights at the diner were a quintessential part of many teenagers lives back in the 1950s, but the 1950s were also a time of political and social change. The world was shocked by the iconic ‘Elvis pelvis,’ and poodle and pencil skirts changed the fashion world forever. Rebellion became the titillating pastime among all that soda shoppe sweetness. It was an era that - like Second Life - rocked and rolled! So, this summer we’re throwing a 1950s themed SL16B with a TON of fun events and happenings. ...

The Lab also stated as in previous recent Second Life Birthdays, there will be a Music Fest and a shopping event. Merchants wanting to take part are asked to fill out a form (link). There will also be a "Come As You Were" party and another "Swaginator" gift hunt "with some updates and changes based on feedback" from last year's.

The event is scheduled to run from June 20 to July 8.

Stay tuned for more information on what's sure to be one of the big events of the year inworld.

For more information, Click Here.
Posted by Bixyl Shuftan at 8:02 AM