Is The Lab Rethinking Sansar As a World? 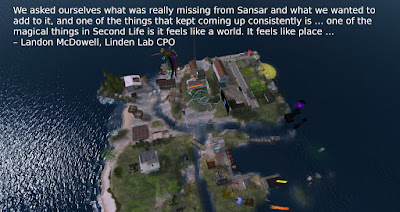 Although Linden Lab has had high hopes for Sansar, it's been something of a hard sell. Despite moves such as trying to attract comedy acts, and making it accessible from Steam, it's usage numbers remain small. While the Lab isn't giving up on it, they are still wondering what could be holding the place back. When Inara Pey wrote about a recent Sansar development meeting, Chief Product Officer Landon McDown seemed to wonder if emphasizing the Next Generation grid as a number of separate experiences rather than a single world was part of the reason it hasn't caught on.

We asked ourselves what was really missing from Sansar and what we wanted to add to it, and one of the things that kept coming up consistently is that one of the magical things in Second Life is it feels like a world. It feels like place. And when we designed Sansar, we didn’t really implement that; it was a design decision where we wanted the individual worlds to stand alone, and be disconnected and independent … [Now] we feel that lack of place, that unification across all the experiences, is something that we’re personally missing and something we want to add into Sansar.

McDown stated in the sound clip, "We have a couple of initiatives to help achieve that." So how soon will one be able to travel between the sims of Sansar like those of Second Life and will it help increase numbers? Time will tell.