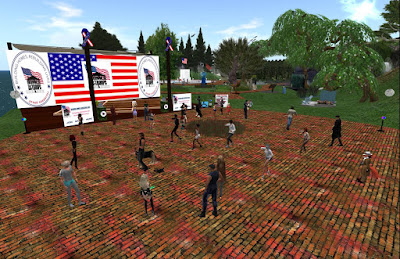 Earlier this week on Sunday February 24, Veterans Isle held it's monthly fundraiser concert. Starting at 11AM SL time, several live musicians and one DJ performed for the audience as they listened and danced. The event was organized by Frets Nirvana to raise money for the Homes For Our Troops veterans charity. 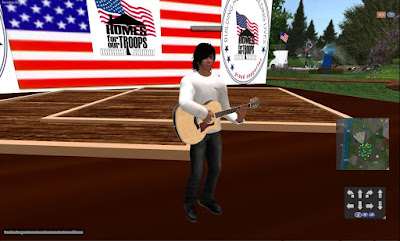 At 2PM, it was the turn of noted musician Maximillion Kleene to take to the stage.

A one hour solo acoustic pop/rock show with Max for an awesome cause  https://www.hfotusa.org/  Music from The Avett Brothers, FOO Fighters, The Beatles, Ed Sheeran, Barenaked Ladies, Jason Mraz, U2, Train, requests and more.  All are welcome.

People donated their cash into two house-shaped kiosks on both sides of the stage. By the end of Maximillion's hour, the amount raised had reached 100,000 Linden dollars. Other performers on the schedule were Waya Snowpaw, Agatha Nowles, Austin Moores, and Singergirl Mode. 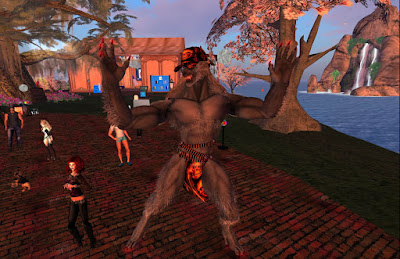 Avatars of various shapes and sizes showed up at the concert, including a huge werewolf that looked 12 feet high. While he looked fierce, he just donned a big cap and danced away with the others. 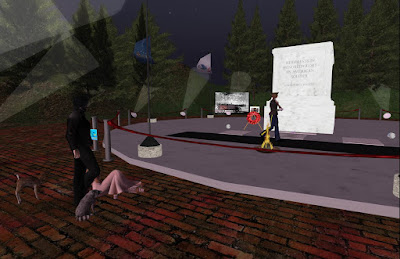 Not everyone was dancing all the time. While I was there, I noticed two people who were taking a moment to reflect on those veterans who didn't make it home.

Veterans Isle usually holds events to raise money for Homes For Our Troops (https://www.hfotusa.org/) on the last Sunday of every month. The next event should be on Sunday March 31.