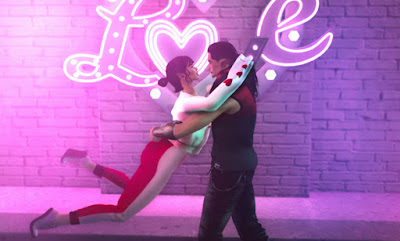 From Linden Lab's "Love Made in SL" series, "Age ain’t nothing but a number for Calisto and Talon Whitewolf, a U.S.-based couple that met about eight years ago in Second Life. While Calisto may be about a decade older than her long-time partner, but the virtual world proved to be the perfect platform to bridge the age gap and connect the two together in the physical world. The courtship began with an initial period of flirting and fun across multiple romantic 3D spaces in Second Life, including a memorable date on a replica of the Titanic!

“'We did the whole couples thing,' says Calisto who adds that over time the signs became more clear that the two were truly meant to be together. As a result, Talon ultimately moved from his home in Virginia to be with Calisto in Kentucky. This move is described by Calista as a 'natural progression…We were best friends and then the next thing I know - he’s here!'
"To learn more about Calisto and Talon’s story, watch the latest episode of “Love Made in SL” below. You can also learn more about dating in Second Life in this recent article on DatingNews.com, too."