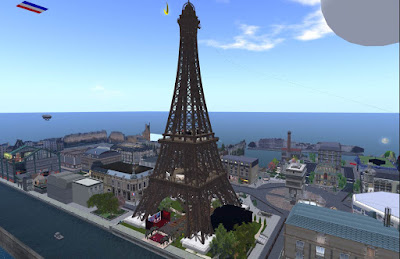 Last week on March 16, the Paris 1900 area celebrated it's tenth anniversary. In was in 2009 that this area representing the capital of France at the turn of the last century was formed. The most visible part of the sim is of course the Eiffel Tower, which when built in real life was the first structure to surpass the height of the Great Pyramid of Giza, which had held the record for millennia. Other places in the area include the Arc de Triomphe (Arch of Triumph), the Moulin Rouge, and the Catacombs.

Yours truly didn't see the actual celebration, but the event grounds and signs about it. Among the events there was a Michael Jackson tribute.

Paris 1900 has been the scene of some other celebrations, such as Bastille Day. But not all events there have been happy ones. in January and November 2015, people gathered there to pay their respects to the fallen of two terrorist attacks.