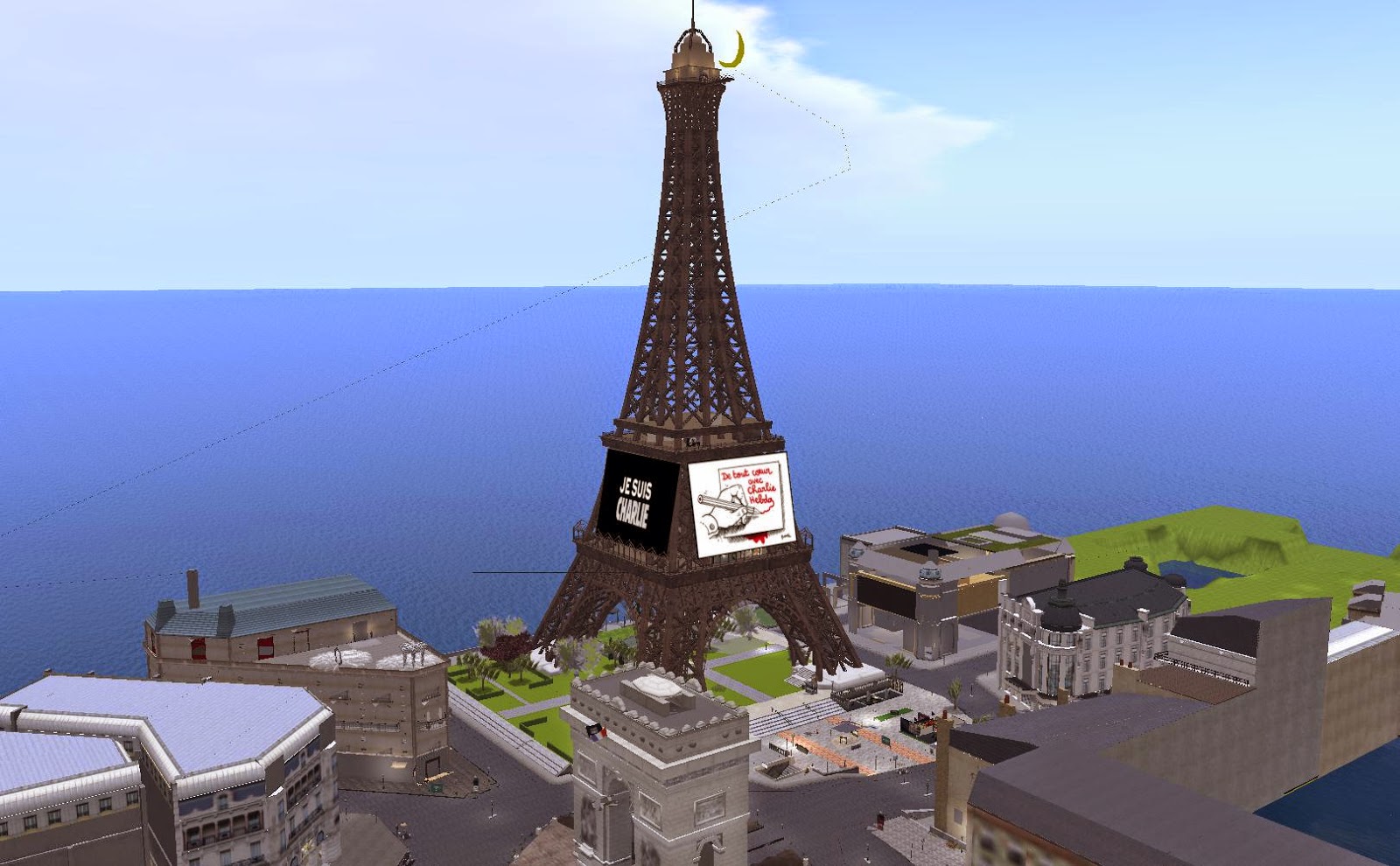 It was yesterday, January 7, when terrorists struck in Paris France, attacking the office of Charlie Hebdo, a satirical magazine. The magazine has a history of lampooning subjects of all kinds from public figures to  politics to religion. But it's poking fun at Islam made it the target of death threats. Their office had been closed for a time after they were bombed. Their editor continued their no-holds-barred approach, once quoted as saying he would prefer to "die on my feet than live on my knees." The terrorists stormed the building, murdering him and eleven others, including two of France's most noted cartoonists and two unarmed policemen, one of whom was shot at close range while raising his hands in a gesture of surrender. 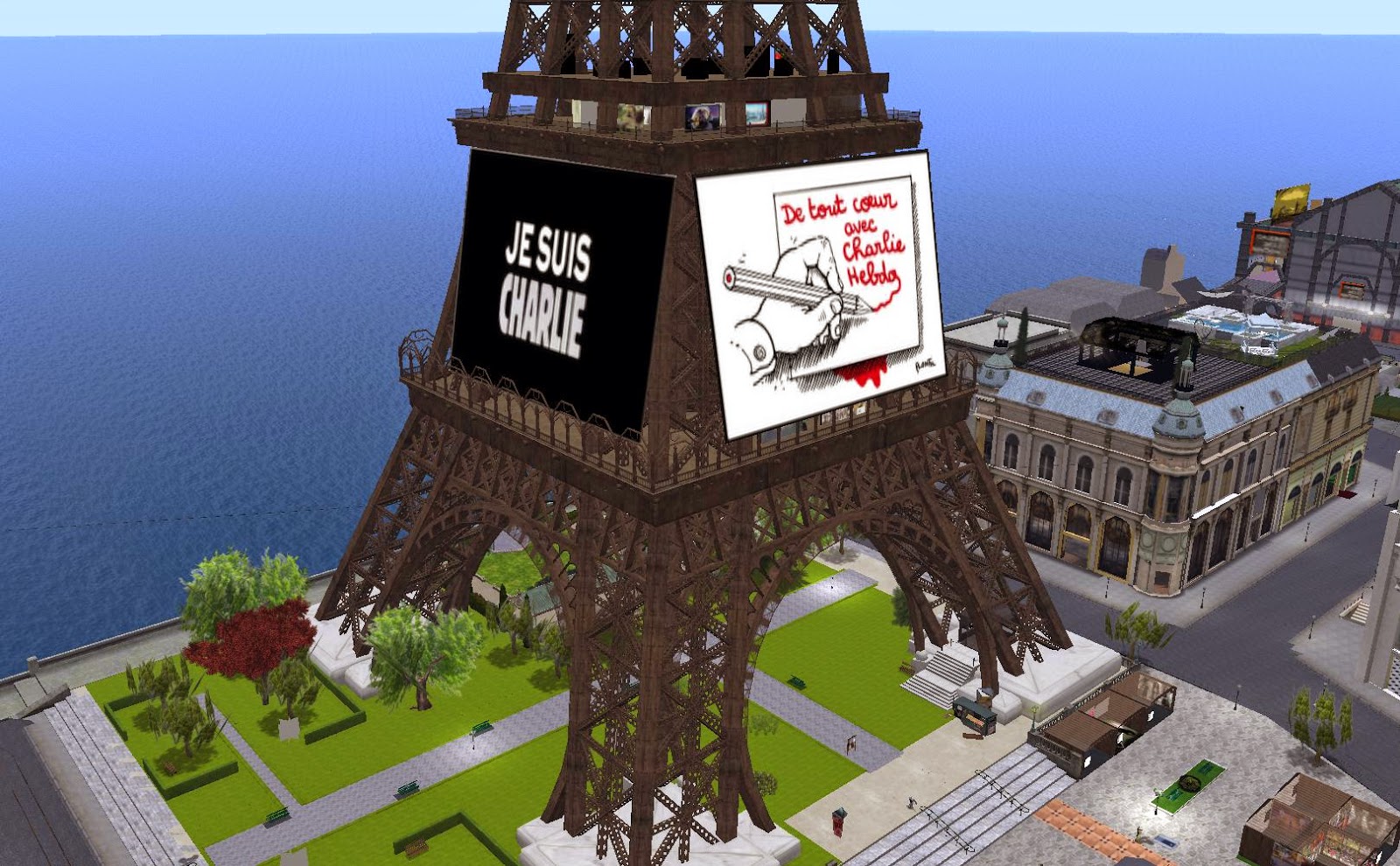 The reaction from both France and around the world has been people making shows of support for the fallen journalists. Some with demonstrations. People have been making and holding signs: JE SUIS CHARLIE :  "I am Charlie." Among the places is one here in Second Life. The owner of the Paris 1900 sims responded by draping the Eiffel Tower with two signs in support of the magazine, "I Am Charlie," and "de tour cour avec Charlie Hebdo" (Any court with Charlie Hebdo). Also in the sim, "I Am Charlie" flags were flying, at half mast along with the French national flags." 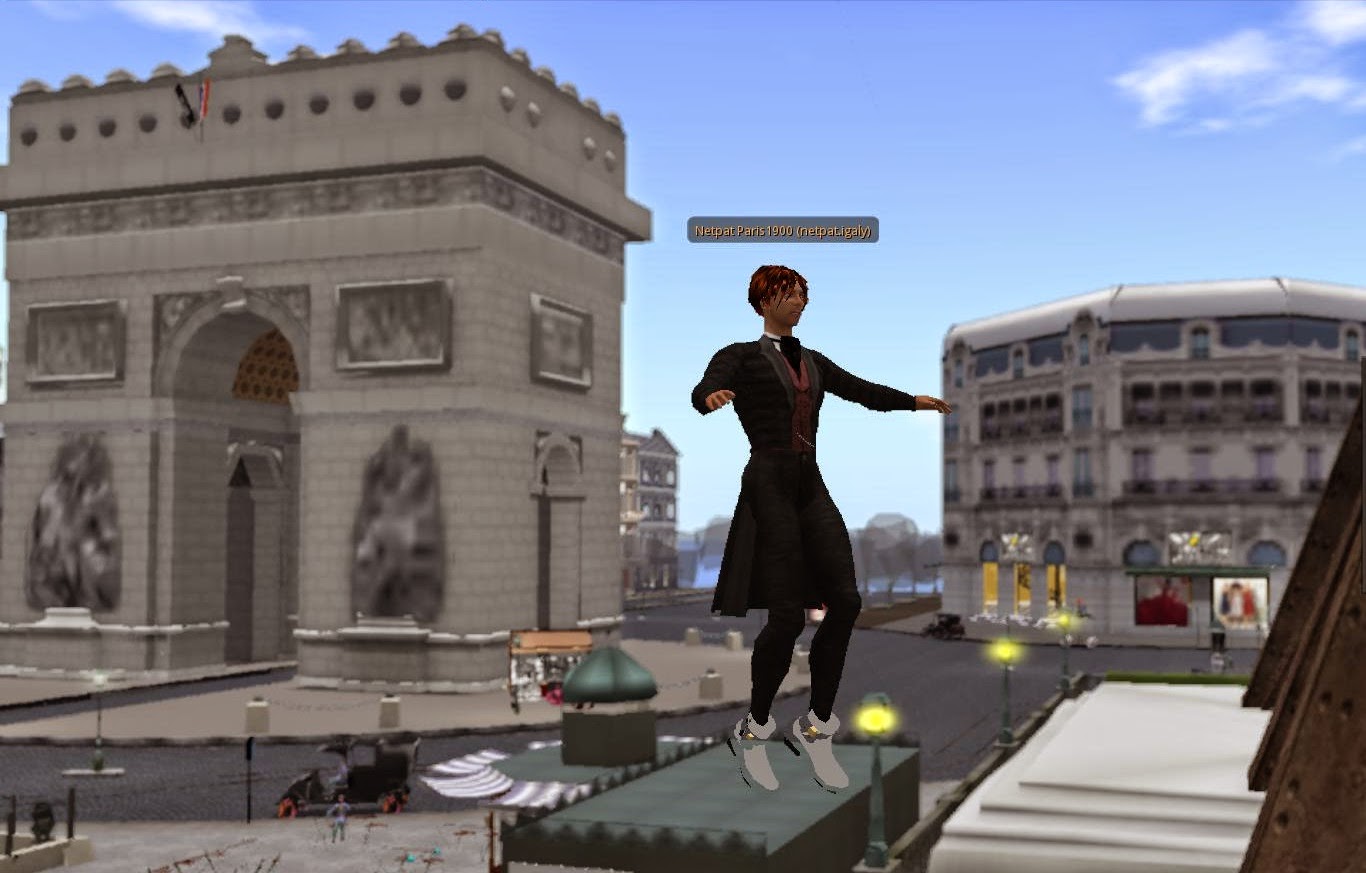 I happened to see the owner of Paris 1900, Netpat Igaly , around. Getting his attention, he told me, "Yes we are deeply affected by this crime. Paris 1900 is also in mourning." He explained that there would be an event soon to honor the fallen, but were looking to see what would be the most appropriate. The banners themselves would be up for three days, and there are plans for a permanent memorial of some kind. Netpat expressed some problems translating what he had to say in English, "Ils ont voulu tuer la liberte de la presse il ne reussisse qu'a rassembler les francais autour de la liberte, légalite et la fraternité. !" This translated to ("They wanted to kill the freedom of the press. The press has to succeed. The French gather around freedom, equality, and brotherhood!")

Not everyone was there to support the dead. There was one resident there dressed in an Arab outfit. One other who was there to show support was BeCkYe Burnstein, "(I) could not believe it when I saw the news today." She then mentioned, "someone gave me a shirt and a texture." She then passed it on to me. The shirt was a women's one, so it doesn't fit men well.