There's been a couple recent news stories about World of Warcraft recently. One was a slight change to how currently inactive accounts are handled. While there has been a kind of Free-to-Play version of the game for a while, such players operate under a number of restrictions, such as not being able to go beyond level 20. And once a player has ever had a paid subscription, they can't so much as log in.

In the upcoming patch of the game, expired subscriptions will be changed to a "Veteran Edition" in which characters up to Level 20 can still be logged in. Such characters will still be under some restrictions, but will be able to join guilds. Characters beyond Level 20 will not be accessible under Veteran. Just how useful this small change is has been a matter of opinion among those responding to the post in the forums. But considering ten million people at last count had paid accounts, it's unlikely that the game will be nudging much closer to free to play. 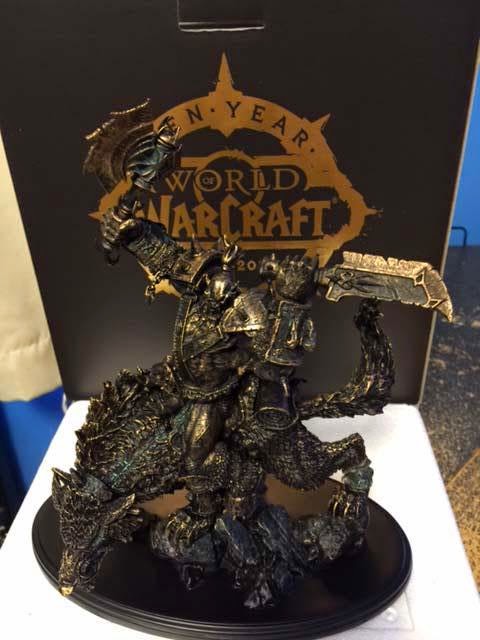 What's gotten more attention is the present that Blizzard entertainment is giving it's most devoted customers. On January 21, Blizzard announced "As a way to thank our most loyal World of Warcraft players, we are sending a physical gift to players that have stuck with us since the very beginning." These players would have to have had started playing within 60 days of when they game was released in 2004, and kept up their subscriptions without interruption.

That the announcement had the keyword "statue" was a clue as to what it was, and as it turns out, it's a small bronze statue of an orc riding a wolf. It's gotten no shortage of comments. Some have commented considering the cash such players have sent Blizzard over time, $15 a month for 120 months is about $1800, Blizzard clearly got the far better of the bargain. Supporters counter that Blizzard didn't have to send anything, and it's better than a simple "thank you" card. It's also notable that a number of these statues have popped up on eBay, sometimes with prices in the hundreds of dollars or even over a thousand, one being offered for 2,500.

On another note, the Newser will not be doing a review of "Warlords of Draenor," at least not anytime soon.