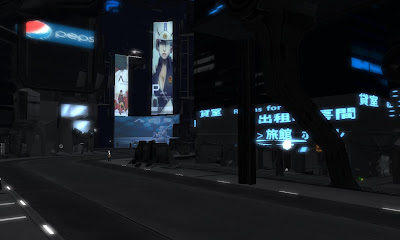 Yesterday, the Newser reported that the Insilico sci-fi roleplay area was offline following the banning of it's controversial owner Skills Hak. There were doubts that the region would survive. But behind the scenes, there were negotiations to transfer ownership from Skills to one of the administrators.

Linden Lab is going to transfer INSILICO *as is* to my friend Abe, who has been one of the administrators of the estate since very early on. No transfer fee and a tier free time to recoup ...

Abeus Madruga sounded cautiously hopeful when commenting about the negotiations.

After meeting with the Lindens in regards to InSilico's future, we have been able to come to a deal that will hopefully get us to a point where we can keep the sims open into the future, and with any luck...self-sustaining again. It's going to be a lot of work, and no doubt there will be some issues along the way. Yet this was the best of possible options to get InSilico open again soon...and within the control of those that have been involved with it for years.

I'm not too sure if I am allowed to discuss the terms of the deal. To be on the safe side I won't get into it the fine details. Just suffice to say that we've been given a period of time to hopefully recoup the losses that this lock-out has incurred for the sims. Once the transfer of ownership documents are received and completed, the sims will be reopened again (they did mention this could take a day or two, so please just a little more patience).

The last post, made by Jeanne Yuriko Aichi (Jeanne Aichi) was a definately hopeful one.

For the past several days, the fate of Insilico has hung in the balance.  Could our city be saved?  Or would we be cast from our home -- the only home some of us have ever known -- and thrust headlong into an uncertain future?  We could only wait for announcements, hoping for the best while preparing in our hearts for the worst.

Today, it appears that the crisis has finally passed.  Insilico, the oldest and grandest of the floating cities, has been granted a new lease on life.

The days ahead may be difficult ones, but they will also be rich in opportunities for those with the strength and vision to seize them.  We must face the future boldly and without hesitation, and not allow recent events to darken our spirits.  As a philosopher once said, "The secret of change is to focus all of your energy not on fighting the old, but on building the new."

So it appears Insilico is back, at least for now. Can it go on without it's owner of eight years? As Abeus wrote, "Time will tell."