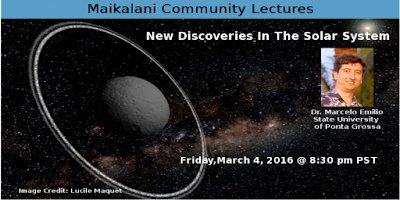 Our ancestors could see Solar system objects with their naked eyes. Mercury, Venus, Mars, Jupiter and Saturn were the planets known in ancient times. In 1609 Galileo Galilei made the first recorded astronomical observations with a telescope. One year later he was the first person to observe Saturn’s rings. Uranus was discovery in 1781 and in 1977 Keck telescope in Hawaii observed rings around Uranus. Neptune was discovered in 1846 and in 1977 a telescope in Chile discovered that Neptune also has rings. Voyager 1 spacecraft found rings around Jupiter in 1979. Voyager 2 discovered more rings around Uranus and Neptune in the 80’s. In this talk we will talk about general proprieties of solar system objects including planets, comets and moons and a technique called stellar occultation that led the discovery for the first time of rings around an asteroid by a group of scientists that includes the speaker.