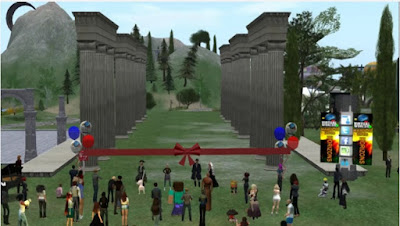 Yesterday at 11AM SL time, The Virtual Worlds Best Practices in Education conference began. The event began with a ribbon-cutting ceremony. This year's four day event will have a bit of a pirate theme, with a "swag bag" containing some pirate costume, and a pirate-themed social area in VWBPE South 3. Following the kickoff, there was a "Shiver Me Timbers" pirate-themed parade

Among those at the kickoff was Mal Burns, whom made a video of the event. 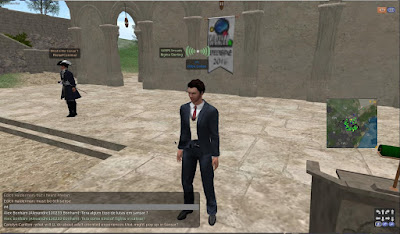 Among those speaking on the first day included Ebbe Linden. At 6PM SL time, he gave a live conference in which he talked about a number of things the Lab was "excited" about. For those whom were interested in early access to Sansar, Ebbe stated they woul d be accepting applications "sometime in May." He cautioned that for now, "it wont be near as rich as SL ... that you have come to expect. ... will be a bit of time before able to do all that you can do in SL"

He then took questions from the audience. When asked what would be the minimum age of people allowed in Sansar, Ebbe answered, "Sansar thinking is to be a bit different than SL content ratings, to make it safe and fun for 13 and up. Things are early, things may change,  no guaranteee. (But) we want to solve sansar in such a way it can be 13 plus." But when asked what would Linden Lab do about adult activities that might pop up in Second Life, Ebbe's response was, "It is not that we won't allow, but we won't focus on adult, no plans to disallow."

When someone asked if Sansar would use the Linden dollar used in Second Life, his answer was "currently, the answer (is) probably no," saying there would be "most likely (an) 'exchange' between Sansar and SL." When asked about his avatar, Ebbe answered it was one of the new default avatars, and he was too busy to customize it.

At the end, he thanked the audience for appearing and listening, "I appreciate everything you guys do."

The VWBPE conference will go on for three more days, ending on Saturday, March 12.