More Places for US Presdential Candidates in Second Life 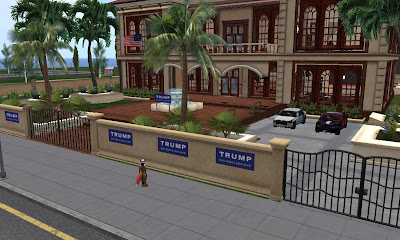 In September, the Newser reported on two places in Second Life build to support US Presidential Candidate Donald Trump. Recently, a few more have been built.

I heard about a "Trump Manor" in the Lionheart Ahadi sim, and heading over, found a large house with a wall around it with a number of Trump campaign signs on it. There were also a couple cars inside, one for estate management, the other which had the image of the candidate on it. Clicking on the gate, it opened, but after I stepped inside, I got a warning from the security system that I had 30 seconds to leave or be given the boot.

I managed to get in touch with the manor's owner, JP Laszio, a member of the "Trump Organization," and one of the people behind the Facebook page, "Donald Trump Thinks Your Waifu Is S***." She stated that the orb had been set up due to griefers and less than reasonable political activists, and if I wanted in to get in touch with her so my name could be added to the list of those allowed in.

More on the discussion with JP will be up later. To get to the manor, head to Lionheart Ahadi (71/38/29). Just contact her if you want inside. 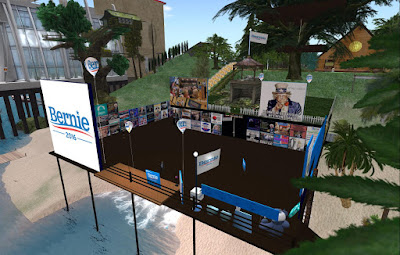 With three areas for "The Donald," what was there for his opposition? The answer was in the Caspoli sim, where I found the "Bernie Sanders SL Headquarters." It was a patio lined with a number of pro-Sanders signs, some praising him, some mocking his opposition. The largest sign was a statement as to how he would pay for his proposals (a series of new taxes and eliminating certain tax breaks). The building is owned by Mac.Wind (Macaria Wind) head of "Vote Bernie Sanders 2016."

Upon entering, I was handed a notecard:

Open to all to enjoy - Group members wearing their group tag are welcome to set home and leave full perm Bernie gifts for the group. Please keep drama and negativity to a minimum and stick to the facts. Ask yourself: What would Bernie do/say?

We all run in to folks who either don't know Bernie or are skeptical about him. These Links to Bernie info including sample articles and facebook pages should be helpful in getting one started on their Bernie Journey. 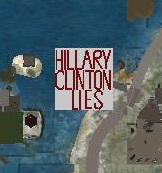 Searching to see if there was a place for candidate Hillary Clinton, I found one in the Pandorus sim. Porting there, it was a dark, small, rusty place with barbed wire fence and a walking skeleton. The clearest statement of the owner's intentions was on the map. This wasn't a place for a candidate, but against one.

More on the Trump Manor, and presumably the Sanders HQ later.