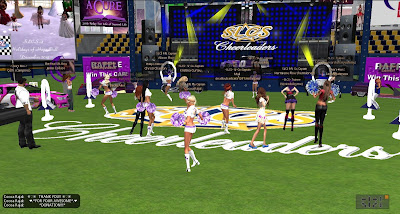 This weekend saw a number of events for the Relay for Life. Among them was the "Funday" event by the Second Life Cheerleading Squad. This twelve hour event lasting from 9AM Second Life time to 9PM (Midnight EST) had a number of musicians performing live, and raised thousands of Lindens, enough to put the team total to 81,500 and into Bronze rank for fundraising.

Please join the Second Life Cheerleading Squad for a day of fun and doing good as we present our first FUNDAY of 2016 on March 13th from 9 am slt to 9 pm to raise funds for the American Cancer Society's Relay For Life program.

Our theme this month is CARS. We will have a full slate of live singers as well as some great DJ's to entertain 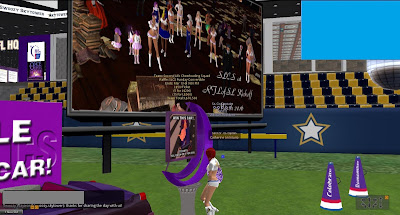 We have some awesome cars on display and raffles to win your own cool car.

At there event, there were a number of cars lined up, each with a kiosk in front, and people could "vote" for their favorite one via donating. There was also a raffle, in which a donation of 50L got someone a chance at winning a purple race car.

Despite some "unscheduled maintenance" of the Grid by Linden Lab, in which "some residents may experience login issues and residents in-world may be logged off or experience degraded performance," the event was a success, and the Second Life Cheerleading Squard joined the handful of teams which had reached the Bronze rank a week after the Relay's start. Two teams have already reached Gold, the Relay Rockers and the Gorean team, and one Platinum, Unmasking A Cure. As of now ten teams, including the new Builder's Brewery and the team of the Newser office neighbors' the Sunbeamers, are in the newly created "Rising Star" rank (25,000 to 75,000 Lindens raised). 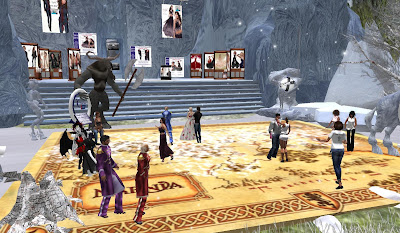 The Cheerleading Squad's Funday wasn't the only event going on. T-1 Radio's Trader Whiplash played some music at a Narnia-themed stage at Fashion for LIfe7. There was a "breedable" pet lion wandering about. But fortunately the only complaint was about cat hair around.