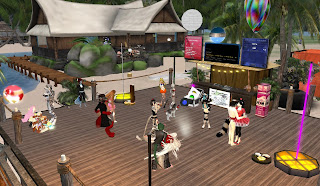 In some discussions between some of the Newser team, and our monthly meeting, it was brought up that many of our articles are about clubs. There's a lot to explore on the Grid, but people also like to relax, get together, and listen to a little music. And there's no shortage of people with dreams of making their own club. And they come in all sorts of designs from the space age theme of "Club Zero Gravity" and "The Rift," to the steampunk theme the old "Club Gears" of Steelhead, to the riverboat club "Queen of Hearts" of the old Mystery sim, pirate clubs, like the original "Club Cutlass" years ago, beach clubs like the current "Happy Vixen" at Purfection, or just finding a spot, put in a DJ booth, a dance floor, and a couple danceball rezzers and tip jars and start calling in one's friends. 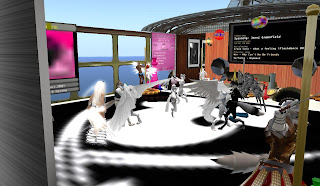 So after some discussion, it was decided to start a new section for the clubs of Second Life: SL Clubbin'. The clubs of our sponsors, such as the Sunweaver Estates, get priority when it comes to mentions. But in our travels, we come across a lot of clubs. So if one strikes our fancy, we'll make a mention of it. But the best way to get attention from us is to get an advertorial article, or better yet sponsor the paper. This way if there's something you want emphasized that we might have overlooked, it'll be mentioned (but if you want to advertise $5,000 Linden contests, you'll have to be offering them).

And with that, it's time to go clubbin' with SL Clubbin.'
Posted by Bixyl Shuftan at 12:00 PM