Computers can be buggy little things, and sometimes an attempt to fix things can backfire. A website a friend recommended to see that might be slowing down my computer instead of giving me a certain freeware program instead led to something else. What did was try to get rid of files it considered "junk," and this unfortunately included access to most of my screenshots on this computer.

What this means is work on several articles and possible articles will be delayed until I can get new screenshots of the areas in questions, at least unless I can regain access to the pictures. It's also likely there may not be more cartoons for a week or two. It depends whether or not I come across scenes with potential humor. While a darn nuisance, it's not truly devastating. 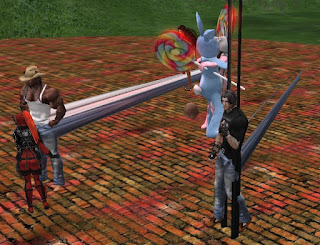 On a related matter, the Singularity viewer I've been using lately has been having some problems. At first, I would see an occasional mesh object that was invisible or stretched. While still uncommon, it's been happening more and more often. Using Firestorm seems to solve this problem. Trouble is, Firestorm is much more likely to crash on my computer, which means doing interviews on it is taking a chance.

Hopefully there will soon be an update for Singularity that will take care of this mess.

Bumps in the road in my journey in Second Life. Hopefully I won't run into one that does the equivalent of breaking an axle.