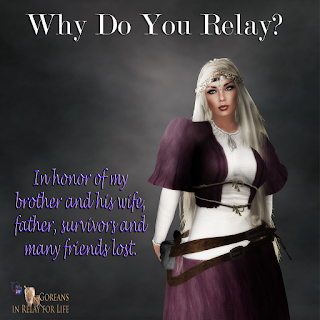 While yesterday's Kickoff event for the Relay for Life season brought many cheers, there was one moment of sadness. It was announced that Zaphara Cazalet, one of the members of Team Strange Journeys, had passed away.

It saddens me deeply to tell you all that Zaphara Cazalet, beloved member of the Strange Family and TSJ team (and Teletus Titans before that), has passed away.

We love her for her love of poetry, her commitment to the Castle Contest- she was working on her castle, almost completed, for this year-- and her sheer passion and loyalty to Relay for Life.

Kaiila Mahoney had this to say, "he had been my co captain for my first 5 years.. she loved to build and helping Row made so much sense.. she lived for Relay and building.. I talked to her sister just a few ago.. She passed away helping her father in his wheel chair she collapsed in his arms.. They believe it might have been an embolism.. She was his caregiver."

Rowena Dubrovna informed Zaphara had been working on something, "I feel awful, she was almost done with her castle, I know she worked hard on it, she was so proud of it."

I have named the my build Castle Cazalet. It is constructed in the distant future around 2900. There are 4 levels The inhabitants love things from the past, thus the decor is from the past. The outer hull consists of solar coating which powers the castle. From within the castle almost all the rooms you can see out over the area. I built with the idea of peace and tranquility in mind. Free of the ravages of our world, meaning for one that cancer no longer exists. I Relay for the family members and friends I have lost to cancer and those who continue to battle cancer.

And so the Relay begins without one of it's members. But her final work, her castle, will be up for display.
Posted by Bixyl Shuftan at 6:01 AM