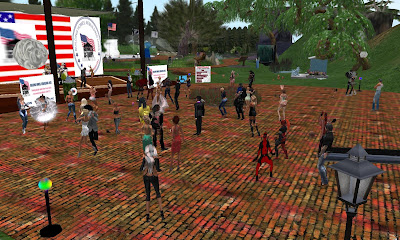 On Easter Sunday March 27, Veterans Isle held it's monthly benefit concert for the "Homes For Our Troops" charity. From 5PM SL time to a little after 9PM (Midnight EST), performers played music in front of the audience. The event was organized by Frets Nirvana, one of the musicians. 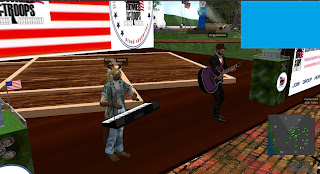 Tonight March 27 we are conducting our monthly benefit for Homes for our Troops …with a great lineup for your Easter Sunday! Celebrate your Easter Sunday evening by supporting those who have sacrificed so much for our freedom. And to top it off we have a one time special performance by Tristyn Homewood! Come on out and help support those who give us our freedom.

Veronica Wesler was the first on stage from 5 to 6PM SL time. At 6PM, on stage were the popular Frogg Marlowe and Jaycatt Nico, who were performing at the benefit for the first time. From 7 to 8 PM, Frets himself performed for the crowd. Lastly at 8PM, Tristyn Homewood and his band rounded out the event. 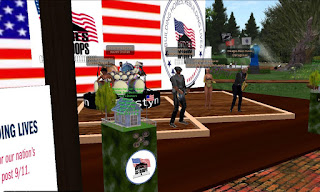 Many dozens of avatars attended the event, with Jaycatt and Frogg attracting a group of Tinies from Raglan while they played. At one point while Trystyn was playing, sixty-four residents were at the event, the largest crowd that yours truly had seen. About half of the money raised that night would come in the last hour. There were also a few antics in the crowd such as one girl in a "Deadpool" outfit and someone in the audience joking, "I emptied my lingerie, shoe and hair fund the other day..  puppy's gonna be running about with a bare puppy butt till May 1." At the end, Trystyn closed out the event with "Glory Hallelujah," and the amount raised climbed past 200,000, "Oh wow! WOW!" A total of 200,830 had been raised.

To learn more about the Homes For Our Troops visit https://www.hfotusa.org