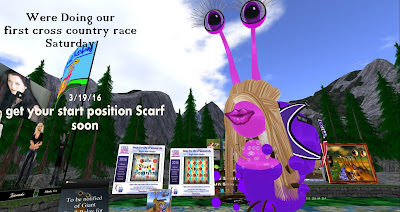 The Giant Snail Racers are about to have their first cross-country (or is it cross-sim) race of 2016. Usually the snail races are in their own sim in an obstacle course. But about once a month from March to July during the Relay season, under the name "Giant Snail Racing Team" RacerX Gullwing runs these marathons spanning dozens of sims. This race, starting at 11AM SL time on Saturday March 19, runs from Abitibi to Noyo goes across a total of 45 sims.

The race is open to all willing to pay an entry fee, which gets you a Giant Racing Snail scarf. There are two levels, the 1000 Linden scarf allowing wearers to start right up at the starting line, and the 500 Linden ones still allowing them to race, but a little further back. Those wishing to take part are asked to show up at least a half hour before the race starts to ensure there will be no problems.