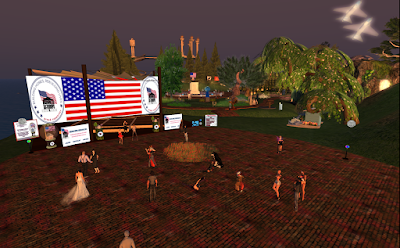 On Sunday January 26, Veterans Isle was the scene of a fundraiser concert for the Homes For Our Troops charity. The event, which was organized in part by guitarist Frets Nirvana, ran from 4PM SL time to about 9PM SL time (Midnight EST) with one DJ and several live performers.

It's the start of  new year and and a new decade for our efforts for extremely wounded veterans through Homes For Our Troops.  And Waya will be kicking off this year's effort like no other DJ can!  Look at the lineup for a great night of music for those who sacrifice all for our freedom.

DJ Waya Snowpaw started things up at 4PM. At 5PM, Dudecansing got up on stage. At 6PM, it was Bella's turn to entertain the crowd. Nina Setner began singing away at 7 PM. And last but not least was Donne Sevore at 8PM. As they performed, the audience donated to two house-shaped kiosks on either side of the stage.

By the end of the concert, a total of 111,100 Linden dollars had been raised.

Homes For Our Troops is an organization that helps disabled veterans by building and modifying homes for them. To learn more about them, check out https://www.hfotusa.org .