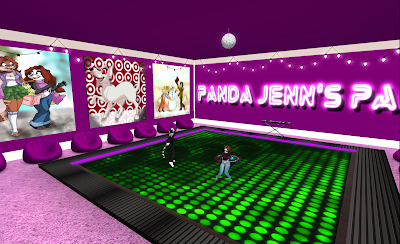 In just a matter of months, the new continent of Bellesseria and it's surrounding islands have become home to quite a community of residents. A new club just opened there, "Panda Jenn's Pad."

Panda Jenn (PandaJenn0 Resident) was the lady who set up the club, "It's a hang out for furs and such," she told me, "It's a small place, but it's meant to be a cozy hang out area." The place itself is mainly a dance floor, with some of Panda's artwork on the wall. The radio stream plays All Fur Radio twenty-four hours a day, so people can come any time to listen to music. There's also a pool table for a game.

We still have some things to add and move around. For the most part, it's ready to go." Panda doesn't own the land itself, "My friend Logan has property there. The Pad is just above it."

Panda is somewhat new to Second Life, though she's been an artist for some time. She has an online comic, "Simply Panda Jenn," that updates about twice a month. She also has artwork on Fur Affinity and Deviant Art.

Panda Jenn's Pad is at https://maps.secondlife.com/secondlife/Parlouf/70/54/2494