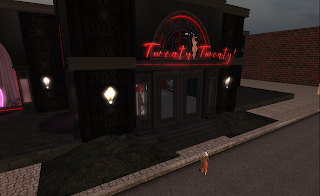 Club Twenty-Twenty is a promising new club high above the New Jacksboro sim. It's owner, Agath Aconitum (Agathrrr Resident), recently showed me the place. The interior was full of red and black, red curtains in front of dark walls, red velvet plush chairs on a red rug with black leather cushions, and of course red carpet treatment from it's staff.

The middle of the dance floor is a spinning record with the club logo. When I was there, there was a small part with several people, humans and furs, partying away. There was a DJ on stage performing music to the crowd. When tipped, there was a shower of balloons soon after. 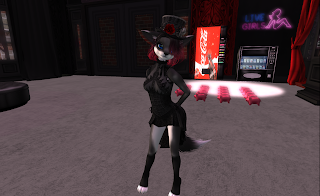 Talking to Agath, she told me the club would start by having one to three events on the weekend, but this should soon grow. She mentioned escort services were welcome here, but no fights between the girls were allowed inside the club, "while inside the club, I will just let nice girls work." No harassment was permitted, and both management and security would be on the watch for it.

Agath also pointed out the nearby "Paw District," just behind an iron bar gate in a brick wall. There was a garden area with trees and campfires. Just over a bridge were some nearby buildings. One on the second floor offered two detailed photoboxes, "so visitors can come over here to take new profile pics." Another building had a lot of games, "this is our Gamehall, with maybe one of the biggest collection of playable games, also for everyone. (smile)" There were a number of flash-enabled arcade games. But there were others, such as Triumph, Lifestyle, and Clued-Up, Second Life inspirations of Risk, Life, and Clue. 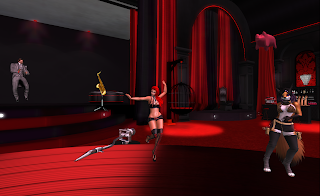 Agath mentioned in the future, she was hoping there would be some roleplay on the streets just outside the club, such as a priest for "Las Vegas" style weddings, "We are searching staff members of all kinds, even individuals are welcome to contact me. The only thing for everyone who wants to work here is, that they should be very openminded, tolerant, nice and playing with open cards to the others. We want it be a team success, not a personal success by me."

The club's next events are Friday (today) at 4PM, and Saturday, also at 4PM

It's clear to see you should give Club Twenty-Twenty a look. It's a club with vision.