Glitches on The Grid

On Friday January 17, Club Cutlass in Sunweaver Bay was having it's "Military" party when all of a sudden, everyone's viewer crashed. As people came back online, they saw the sim was down. It took several minutes, but eventually the area was back online and the party resumed.

But this wasn't the only glitch this weekend. On Sunday afternoon, January 19, people were saying in SL and Discord they were having a hard time logging on.  Checking the Grid Status Report, the Lab confirmed there were login issues that day, as well as trouble on the 17th. 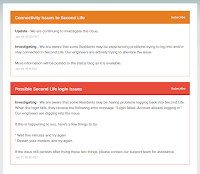 We are aware that some Residents may be experiencing problems trying to log into and/or stay connected to Second Life. Our engineers are actively trying to alleviate the issue.

It took a few hours, but eventually the Lindens "banging on things" had some results, and people were able to login and log off without worry. At least most of us weren't worried. One friend of mine whom was both at Cutlass on Friday and had login trouble Sunday half-seriously wondered if somehow the Lindens were out to get her. They weren't of course, though it certainly felt like it.