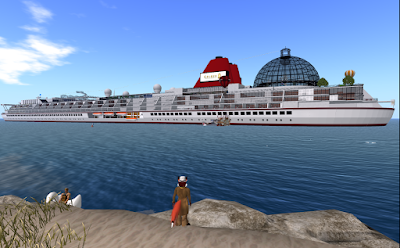 Yesterday evening, word began to spread about a sight just off the west coast of the new continent of Bellisseria. It was the SS Galaxy, Second Life's largest ship, three sims in length.

A vacation cruise liner, from 2007 to 2015 it was an active area, it's owner and staff renting out rooms and organizing events. Then following it's worst griefing attack ever in which the particular Linden that answered to their call for help responded poorly, the decision was made to close the ship. But Linden Lab decided to bring the ship back, and several months later it was back on the Grid. 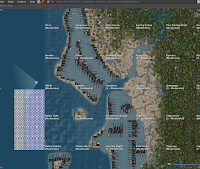 But, there was no staff to welcome people, organize events, or arrange for people to have a cabin for a while. Occasionally people from outside would organize an event. Still, it wasn't the same ship those who saw it in earlier days knew. On those occasions I went there, I was either alone or there was just one or two others.

After hearing from a couple friends, I decided to check things out for myself. While the ship's old location on the map showed it there, a closer look showed nothing but water and the sims were inaccessible. While where the Galaxy really was, it wasn't showing on the map nor were the sim names. Nor could anyone TP there. One could only head over from the adjacent Hibiki, Bazby Gulf, and Belby Depths sims.

Getting there, the ship was the same one I remembered, and I ran into people from the continent whom were happily looking the ship over and inviting over friends. If Linden Lab wanted to revive interest in the ship, it's done so for the short term. The Newser was told that someone from the Lab would be making an announcement soon. So stay tuned for further details.