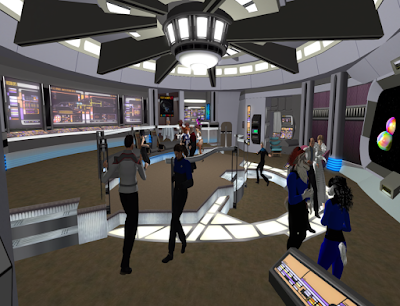 ** 6pm SLT ** DJ Holocluck Henly will be hosting 90 minutes of Trekkish Spacey Wacey tunes in celebration of STAR TREK VOYAGER'S 25TH ANNIVERSARY.  The party will be on Voyager, which has moved into high orbit above Rosehaven.  See you soon!

"Voyager" was the third Star Trek series taking place in the "Next Generation" universe, airing for seven seasons from 1995 to 2001.
Posted by Bixyl Shuftan at 6:02 AM