Reflections on The SL18B 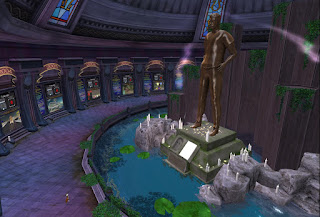 "Ebbe is gone, but Second Life goes on." That was the message the Lindens were sending at this year's Second Life Birthday. There were other details. But the recent death of CEO Ebbe Altberg overshadowed them.

Last year, there were no great revelations at the SL17B Linden and Mole discussions. The Lab wanted to reassure the residents the move to The Cloud was going smoothly, and it was offering new types of Linden Homes and expanding the Bellisseria continent. But those details would soon be overlooked as days later came news of Linden Lab being acquired. So for two years in a row, the announcements made by the Lab were in the shadow of other news around the time.

But what the Lab did have to say this year was noteworthy. They announced the new class of upcoming Linden Homes: fantasy. They also announced the continued expansion of Bellisseria to place the neighborhoods of these now homes. There would be new starter avatars and a new starting area for new residents. The Lab stated it was getting closer to having a chat app available for mobile devices (and a few weeks later they would announce Apple had accepted one). There was an acknowledgement by Brett Linden that the Lab hadn't done quite enough to promote nonhuman avatars, such as furries, in the past. And of course there was the first time one of the Lab's new owners appeared in an interview to speak to the residents.

The overall layout of the sims seemed similar to last year's to me, especially the entry area. While it wasn't the exact same layout as the trees had some giant mushrooms mixed in with them, it did have much the same feel (As my viewer does not see the EEP feature for skies, perhaps there was effort in there that I missed). It was notable that for the first time, the sims didn't have a number in their names, called "SLB" instead of SL18B." Perhaps the latter will be how the Lab names the sims from now on.

While the Cake Stage from previous SLB events is still missed, the design of this year's stage to look a little like a turtle got some compliments. For the first time, there was a Skill Game area.

And of course there were the exhibits. Like last year, the Lab informed the exhibitors they weren't going to be overly strict to keeping in theme. While some took advantage of that, other exhibitors tried to stay within it. The result was an interesting mix of exhibits that helped make "The Birthday" worth going to, notably once the music events were all over. 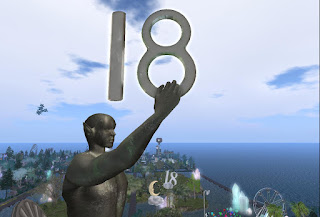 It was noteable that soon after the celebration ended came the announcement from the Lab that it's chat app for mobile devices would soon be ready. If not for the passing of the late CEO, this might have been what the event would have been remembered for.

Despite the overall layout being so similar to last year, it was a good SL18B. Exactly what next year has in store, who knows. Probably a new kind of Linden home. Perhaps a new game, or maybe a new continent (unless they keep growing Bellisseria).

And thank you for what you've done, Ebbe Altberg.