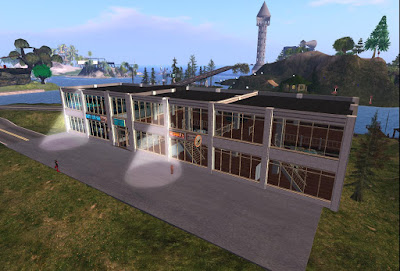 While the Sunweaver Estates is primarily a residential area, there are some places to shop there. One of the larger ones is the Puddle Jumper Mall in the Sunlight Bay sim. It is owned by Cynthia Farshore.

Stepping inside, the small middle area has a couple tables one can sit and have a cold drink. The west wing is a freebie area, with many of the goods that were previously in the Arcadia Asylum Library that had closed in January.  Here, there are a number of old but useful items. This includes textures that can be used to help make items (while they can be given away, they cannot be sold).

The east wing has a number of goods up for sale.  There are a number of items of clothing such as Victorian wear from Zan's, and other eras from Ancient Times to the Colonial Era to the Wild West. There's also jewelry, swords and staves, sci-fi style armor, furniture of both fantasy and sci-fi settings, airport structures, typing animations, and more. A few items such as the Swimmer HUD are for practically nothing.

The second floor of the mall has only a few items up for sake so far, aimed at products in music such as keyboards. There will be more items in the future.

The mall is next to Farshore Field, the Sunweaver community's airport .