For some newcomers to Second Life, their first steps will be at a new place inworld. There's a new entry place for those starting out: Welcome Island. 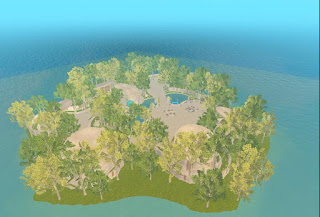 Hearing that new accounts were already entering Second Life through the new place, I created a new alt to take a look. The new sign-up process doesn't offer a choice of appearances. Every male logs in as the same brown-haired human with facial hair, jeans, an open shirt, and carrying a radio. Women were logging in wearing red dresses with white blouses and carrying pocketbooks. A "Welcome Island Guidebook" opened up, providing instructions on how to move around (on the Linden Viewer that new accounts are asked to use, one can walk about using the WASD keys). 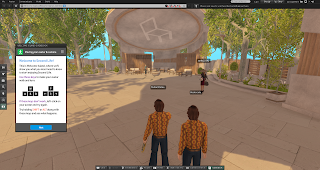 There were a few areas to be used as one went through the Guidebook, for practicing sitting, introducing newcomers to the ability to change appearances with the various starter avatars (aside from a couple fierce-looking werewolves, the only alternatives to human were a few vampires and elven avatars), and getting attachments and wearing and detaching them. Overall, it looked like a park area, with plenty of greenery and plenty of places to sit, with some water.

Not everyone there is a newcomer. I was messaged by someone almost right away welcoming me and asking if I needed help. So it looks like volunteers are there at times to help out those who are new. I was also invited to a group, "The Newbie Mafia," then cautioned about accepting any more invites. 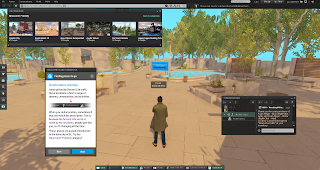 Near the end, the Guidebook brought up the Destinations Guide and the Events page, encouraging people to explore the wider virtual world, with a nod to the Guide's "Newcomer Friendly" section. It also invited people to check out blogs about Second Life. My new alt's first journey ended at New Citizens Incorporated, though someone could have easily checked out London City if they didn't mind the crowd there.

Not everyone appears on the New Welcome Island. I ended up creating two alts as the first I made appeared on the same Learning Island I did four years earlier. So the Lab hasn't replaced the previous newcomer places, at least not yet.

Comparing Welcome Island to the two-sim Learning and Social Islands, the new experience is faster and quicker. There's nothing on how to jump or fly, no introduction to building, no instructional videos, none of Social Island's games that made learning a little more entertaining. At least there wouldn't be if it wasn't for the helpers who were at Welcome Island. 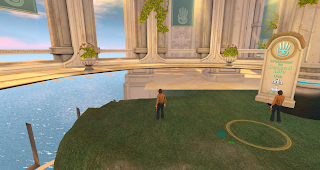 This new area seems more dependent on volunteers, and perhaps people at newcomer-friendly areas the new residents would see, to answer questions. But there's no comparison to Destination Island of 2012 that offered very little instructions and newcomers could very well end up in a place that threw them out for being too young, and the new resident experience introduced in 2013 that was apparently so bad the Lindens discarded it in a few months. The Learning and Social Islands came about in September 2013, and have been around for almost a decade with one change in 2017.

While Welcome Island is closed to all but brand new accounts and volunteers, there is a Welcome Back Island anyone can visit to check out what the place is like.