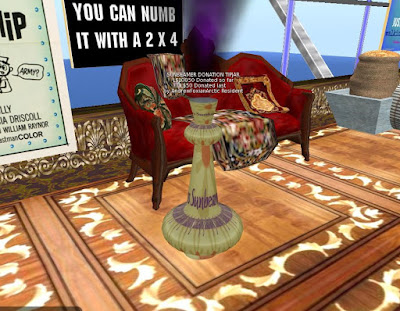 The Relay season is over, and RFL Team Sunbeamer's fundraising kiosks are put away until next February. But that doesn't mean the fundraising is completely shut down. At Club Cutlass, Rita Mariner set up a tip jar for those wanting to donate money between seasons, the money going to one of her alts. Once the 2022 Relay for Life in Second Life fundraising season starts, the money will go to Team Sunbeamers.

As of the writing of this brief, there's a little more than 10,000 Linden dollars in the tip jar. How much will there be when the season starts? We'll see.