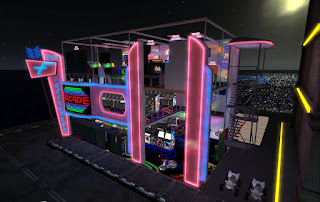 Montecito Bay's gone through a lot of changes since the Newser last talked about the sim. Talking to the management, they weren't quite ready to go into much detail about them. Not yet anyway. But they did point out one thing they wanted some mention: the Firecracker Arcade in the southwest part of the sim. The games are from Mateo Firecaster, with Moff (MoffettMephit Resident) having contributed the arcade building.

The arcade has three floors, the top two accessible by a stairway on the side of the building (or flying up). The first two have a huge number of arcade games.

Some are games those whom frequented arcades in the 80s and 90s would recognize. Some never saw the arcade, found only in console or app gaming. Some had dark screens and unplayable. Others were playable only for those with Flash on their computer, and even for some whom do there may be problems.

The third floor has various inworld games, such as Zombie Meltdown and Fist of Discomfort. Unlike the ones directly below, flash is not required to play them. Lag may be a slight problem, though. The bottom also had a few novelty games, such as "How Sexy Are You." Behind the arcade is a small playable bowling alley game.

Most everything else about the place was decorative. There was a change machine, but it accepts donations. I saw a pizza delivery drone and a fruit n drink delivery one, each when touched offering a snack or drink. There's a hoverscooter, but it can't be ridden.

As for the sim's new look, which is obvious when looking at the area around the arcade, well, that's for another article.