The Fourmilab Cloud Halo, A Way Of Seeing If A Sim Has Gone To The Cloud 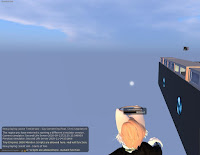 One of the big things in Second Life going on is the move of sim data to Amazon Cloud servers, also known as the move to the Cloud or the uplift to the Cloud. It was recently announced that just over half the sims were now uplifted. So how does one tell if a sim has gone to the Cloud? For most residents, there usually isn't a quick way. But there is one quick way that all one needs is a visit to the Second Life Marketplace, the Fourmilab Cloud Halo.

It is possible to determine whether a region is on an original host or the cloud by examining the host name of the simulation, but many users aren't familiar with the arcana of doing so. Fourmilab Cloud Halo is a light-hearted attachment which makes it easy to see the hosting status wherever you happen to visit and alert you to changes when you arrive in a new region.

There's no known location inworld to get the Cloud Halo. The sole known place is on Marketplace. Fortunately the item is free, so just "purchase" and the Halo folder will appear in your "Recieved Items." To put it on, just "add it." You may need to edit and adjust the height a little. Once it's worn, should the sim be uplifted into the Cloud, the halo should briefly glow and there should be a few seconds of harp music. If the sim data is still in the old servers, the halo appears as dull metal and there's a moment of "sad trombone" music. After five seconds, the halo will fade from view. Going from sim to sim, either by flying or running around or teleporting, the halo remains unchanged if the sim entered is the same as the one you just came from. If it's different, it briefly appears with the opposing appearance and music as last time. So it "appears only when you change to or from the Cloud."

The Cloud Halo comes with a user guide notecard, that allows for some adjustments. Trying it out, it did the "wah-wah" sound and faded after briefly appearing as metal. It took some time flying around, but eventually it lit up and did the harp sounds. Besides the pictures I took, one can also check out a Youtube.

John Walker (Fourmilab Resident) is the man behind the Cloud Halo. He has a number of other products on Marketplace, all of them free.