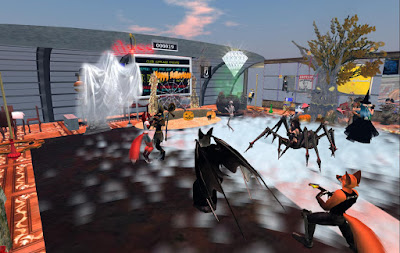 Last weekend had Halloween on Saturday. And there were numerous events that day such as at Club Cutlass (above) and the Happy Vixen. But there were plenty at others such as the Dark Parade at Furry Fashion, Montecito Bay having it's Halloween party at a new club, 13th Circle, the twelve hour Halloween event by the Second Life Cheerleading Squad for Making Strides, the Halloween Bash held by the Confederation of Democratic Simulators, and more.

Halloween may be over, but November will have some events of it's own. With Election Day in the United States tomorrow, there should be gatherings at the Trump Pub, Cafe Wellstone, and other locations. Then comes Guy Fawkes Day, Veterans Day, and later on Thanksgiving.